Antonino Grillo left Calabria almost fifty years ago to go to Turin, where he found work as a driver in a national transport company. Joined by his family he then bought a truck with his first savings and so in the little free time that he had, he began a career in the field of removals.

The company was purely a family business: His wife answered the telephone and made appointments for quotations, whilst he did the removal work with the help of some workers. Over the next few years, Antonino Grillo Removals was created having expanded and already reached a fleet of 4 trucks.

However, Grillo was aware of the fact that Turin, both economically and qualitatively, was a poor market that did not allow for further development. So, in 1966 he decided to enter the much larger market in Milan, where some of the largest removals companies of the time were already operating.

Milan responded well to Grillo Removals, due to its methodology of hard work and attention to detail. They more than met the expectations of their customers and therefore a positive message was circulated by word of mouth, which resulted in the best type of advertising the company has had during its near 55 year span. 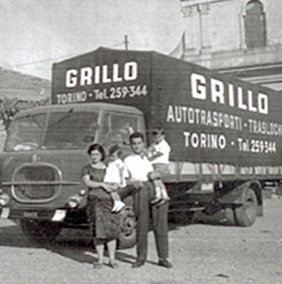 In the early 70's Antonino Grillo Removals had grown to 40 employees and had a rapidly expanding fleet. Requests from customers continued to increase, largely due to the quality of work. Starting from the early 80's, it became necessary to build large warehouses to store the fleet and to safeguard client’s furniture and property.

This slowly began to grow further to service the clients’ needs and the services offered became more innovative.  Today, this has resulted in a constant search to develop our offerings through the acquisition of new technologies, vehicles, trucks, and cranes. The more cutting edge we strive to be, the better the services we have to offer.

Not only removals!
Our little secret: la Cascina Bianca.

By the 1970s Antonino Grillo, with his strong farming roots, had committed some time to the running of a farm.
This passion is still going today with the wine company Vitivinicola in the Monferrato hills is where you will find, Cascina Bianca.The vineyards produce some of the finest D.O.C. wines with Barbera d’Asti and Dolcetto d’Acqui grapesi.

With reference to the General Data Protection Regulation GDPR (Regulation (EU) 2016/679) - Regulation on the protection of personal data - we inform you that the processing of your personal data is aimed at managing this transaction, sending our material information and use of data by Grillo dealers and agents.
The Data Controller is Grillo Antonino Removals. You can exercise your rights (including rights of access, rectification, updating and cancellation) by contacting Grillo Antonino Removals, Via Sardegna 38 - 20146 Milan (MI), Tel. (+39) 02435224 - Telefax (+39) 02437104, e-mail info@grilloantonino.it.
We ask you to express your consent to the processing of data for the purposes described above.